Today was a bit retrospective for me. I spent most of the day reflecting on all that I’ve done since graduation in the spring. I had an amazing season with the Winnipeg Rifles, where I learned a tonne from the projects I worked on for them. For instance, back lighting and silhouetting a subject, like I did in their 2016 season promo. 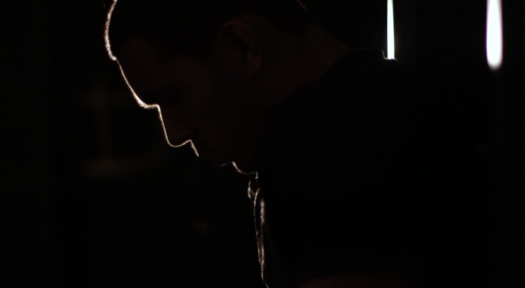 (See the full video on my work page.)

This shot was accomplished using only two lights. There’s the one behind him, which comes into view a few frames past this still, and there’s one way off on the other side of the room. I placed the second light far enough away so that it didn’t take away from the silhouette effect, but still close enough to bring out a touch of colour in his face.

This afternoon, I thought it might be a good idea to update my demo reel. Up to today, the demo reel I was rolling with was full of shots from college assignments. It’s not that I’m ashamed of the work I did in school, quite the opposite. But to continue on with that demo reel in spite of all the great new things I’ve done since would be doing a huge disservice to myself and those who might want to contract me to shoot for them.

My first demo reel was a bit disorganized, to be honest. I cut up a music track and completely customized it, which was cool, but it really took away from the feel of the video. Plus, I didn’t really organize the shot selections in any particular way.

This time, I’ve put sequences together from specific projects and jobs. It starts with my best work from the Winnipeg Rifles, then moves into a mix of interviews I’ve done. After, I kick off a little medley of TENTEN Kitchens with the logo animation I created for them. After that, it rolls into a music section, and finishes off with a few selects from school assignments.

This is a demo that I can really get behind.